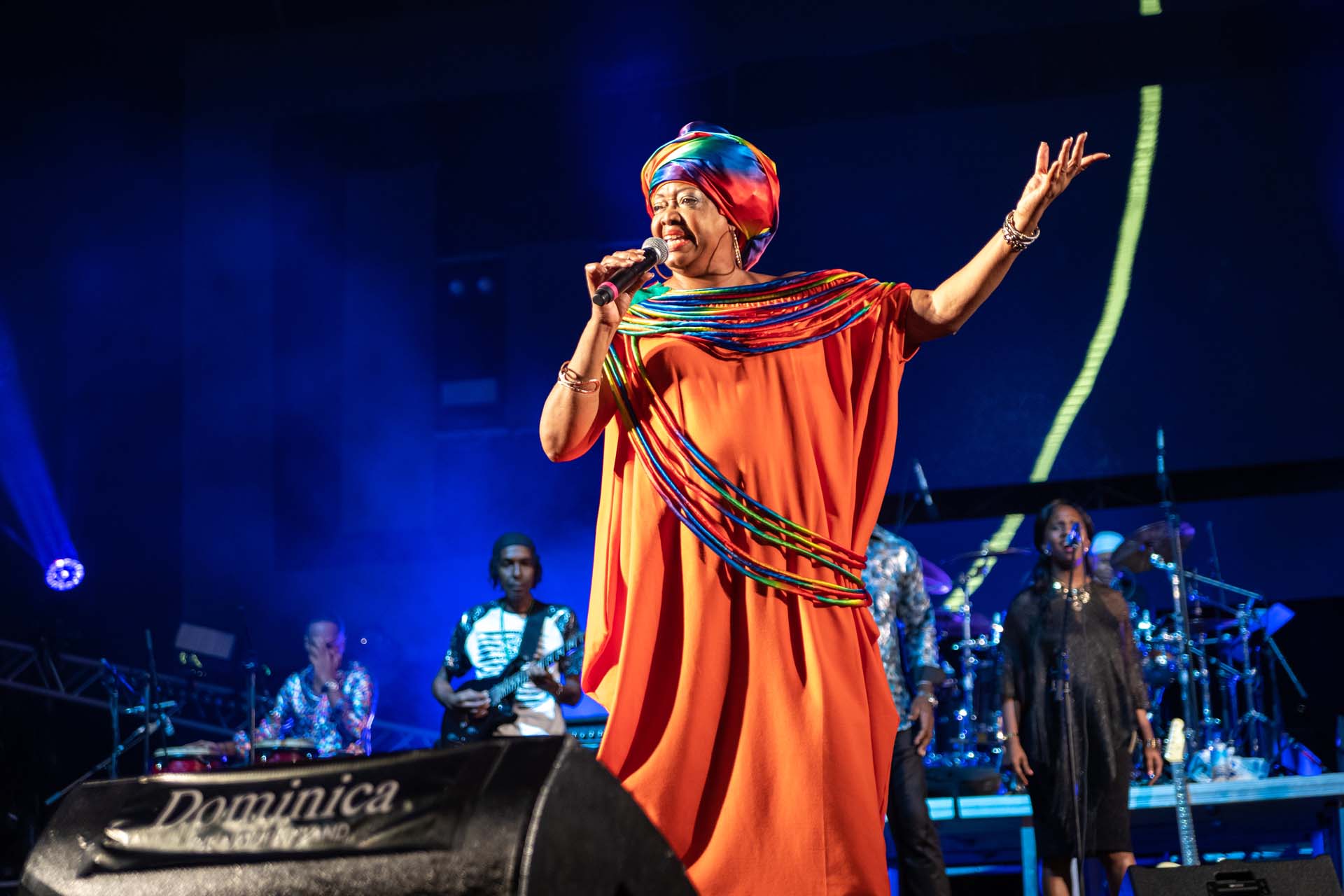 Ophelia burst on the music scene in 1978 with her seminal hit “AIE Dominique. Though she had always been singing since she was a small child in Curacao where she was born, it was after she married McCarthy Marie that her career moved to another level. In fact “AIE Dominique” was written for the Creole song contest of 1975 which she handsomely won. The song was recorded in Paris in 1978 and was an immediate hit and has remained Ophelia’s most popular song for the last 40 years.

When the record was released in July of 1978 AIE Dominique was immediately a hit in Guadeloupe and Martinique although this was towards the end of the dominance of Dominican music in the French West Indies. Throughout the eighties Ophelia was not only the musical voice of Dominica in the Creole world, but she also became the face of Dominica and was regularly in demand by the business and political classes in the French West Indies for different commercial and political events. When Ophelia made an appearance at a record shop in Fort-de France to autograph the album for fans a veritable riot broke out which necessitated the intervention of the gendarmes to clear the streets!!

In the Caribbean of 1978 music was a strictly male affair. Dominica and the French West Indies were no different. In fact some record distributors in the French West Indies refused initially to carry Ophelia’s record on the grounds that the public would not buy records by a woman singer! However Ophelia’s reception by the public was nothing short of ecstatic; you could say that she was the prophet long awaited by a suffering population, particularly the females. The record eventually sold more than 100,000 copies and is still selling in CD format. It was not long before requests for live performances began pouring in and Ophelia’s first concert in Guadeloupe took place in February of 1979. The Centre Des Arts et de la culture was at the time the most sophisticated concert hall in the Eastern Caribbean and this was the first concert to be held there featuring Caribbean popular music. The hall was packed to capacity; the backing band was the legendary Vikings de la Guadeloupe featuring Pierre-Edouard Decimus, who would later found the legendary Zouk band KASSAV, on bass.

With guidance from Gordon a well-rounded concert programme was put together which included a couple well known international standards. From the first note Ophelia connected with the audience and she was on her way. Not only was a star born that night, but the rise of female singers in the Creole music world had begun.

Requests for more performances followed and les Vikings, for all practical purposes, became Ophelia’s backing band eventually playing hundreds of concerts in Guadeloupe, Martinique, French Guyana and France. Ophelia’s performances helped tremendously to shift Creole music towards concerts and less of the marathon dance sessions which was the popular form of live music presentations in the French West Indies. Ophelia had many concerts where she played to crowds in excess of 10,000 persons like the Fete de Justice Concert in Lamentin for the communist party of Martinique. Other notable performances include the eight sold out concerts at Theatre de la Renaissance in Paris from which a live record was released. Ophelia has performed in every island in the Caribbean except Cuba. She has performed in Jamaica, Trinidad (which is fast becoming her new stomping ground), Barbados, Grenada, St.Lucia, Tobago, Antigua…

Ophelia has won many awards – The Maracas D’or in Paris, the national award, the Sisserou medal of honour and the Caribbean Cultural Icon award from the CARIFESTA committee – the only person to be awarded in the musical field. Of all the awards she has received Ophelia cherishes her Lifetime Achievement Award received from Sacem in Martinique the most. She is also very appreciative of her first one, the Maracas d’Or in Paris in 1981, as well as the Golden Drum Award in Dominica in 1986, and the Sisserou Award in 1989.

In 2016 Ophelia laid down a very sophisticated concert at the WCMF 17 which features the POM Kannel dancers from Martinique. Many persons consider that concert to be the best and most professional concert to ever grace the WCMF stage since its inception. This year 2019 OPHELIA is back on the WCMF stage and her fans can expect a top of the line presentation.