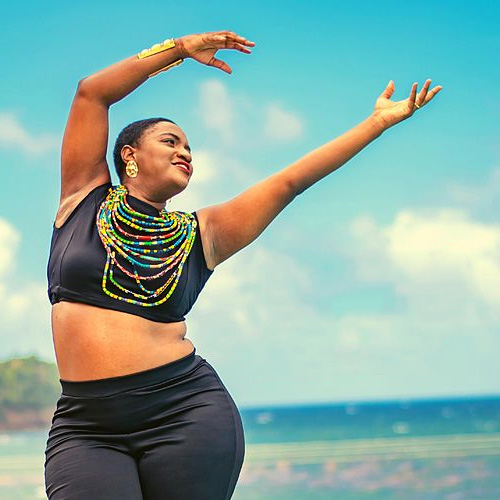 MP describes her sound as “Afro Sound”, which embodies everything with an innate sweet flavor and rhythm. Her music is rich with deep and relatable lyrics, carefully delivered by her silvery voice through enthralling melodies. The perfect blend of her African heritage and Caribbean influence is heard in her sweet Afrobeats, Afropop, Afrodance, Zouk and Kompa compositions.

It may seem hard to believe that Marie Pascale is only now stepping out as a Solo Recording artist, simply because within the 10 years of her Musical Journey, she has managed to: graduate from Medical School with Honors, achieve a Grade 5 Distinction ABRSM (Associated Board of Royal School of Music) Flute Certification, build establish her own French/English Linguistics Company and establish an Afrocentric Positive and Energetic Brand, all this while performing on multiple stages as a chorister, soloist, background singer or dancer. Now, after years of vocal and performance training and underground performing, she is stepping out on her own as “Marie Pascale”, A Silvery voice with an African Heart and a Caribbean Soul.

Born on March 31st (Easter Day of 1991) in the city of Douala, Economic Capital of Cameroon, MP grew up with a passion for Medicine and Music, one of which (music), she was unable to fully pursue on a wide scale.

Her musical journey began in March 2009, when MP and her sister Clementine travelled to the Nature Isle of the Caribbean, Dominica to pursue Medical Studies. The journey to Dominica reminded her of a similar journey that her ancestors took many years ago, though unwillingly. This similarity fueled her determination to become a self-proclaimed ambassador of Africa to the Caribbean. She joined the acclaimed Sixth Form Sisserou Singers choir in 2011 and immersed herself into the exhilarating culture of Dominica. This immersion is responsible for her unique sound, which is a fusion of her African heritage and her Caribbean influence.

Influenced by great African performers, such as Brenda Fassi and Angelique Kidjo, MP sings from her soul with a high-pitched silvery voice that walks the fine line between charm and seduction. Her unapologetically energetic performances drip with emotion and fire.

To date, she has graced many stages, including the Dominica Staging of Broadway Musical “Once On This Island” (2017), Dominica’s Carnival Opening Ceremony (2018) or Miss Dominica pageant (2019). She co-headlined her own Dominica’s Jazz and Creole Festival Fringe event (Jazzique) in 2019, performed at the 2019 Gospel Thanksgiving concert in remembrance of the passage of Hurricane Maria in Dominica, The Dominica’s World Creole Music Festival (2019) alongside Extasy Band. Her most recent single and video “Melanin” released in 2020 has spiked in popularity due to its unapologetic expression and display of black culture, black love and black freedom.

MP’s creative muse has fueled her community oriented philanthropic pursuits. Not being able to experience music in its full value as a child has made her tremendously passionate about working with children and youth choirs. She has founded, directed and trained youth choirs in Dominica and St. Vincent and the Grenadines, composed and co-written seven (7) musicals, mini-musicals and plays, conducted choral summer programs, and simply given her time, talent and treasure to any young person wishing to get involved in performing arts. For her it is not just about doing it, it is about making sure everyone does it too.

Despite all of these achievements, Marie Pascale (referred as everyone’s favorite cousin) is only getting started. Armed with her determination and passion, she is working hard to add much more credit to her blossoming resume: philanthropist, entrepreneur, worldwide music advocate. If her vocals and performances don’t seal the deal, her positive energy and indomitable winning spirit will definitely steal you away!